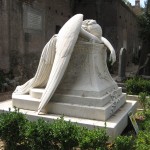 No self respecting avid traveller would miss the opportunity to visit some of Europe’s most infamous cemeteries including Pere Lachaise in Paris and the Strangers Cemetery in Rome. Being Halloween I thought I would reminisce some highlights of our surreptitious walks through these intriguing locations. As one pensively meanders around the snarling vine encrusted and decaying graves that is the commotion of Pere Lachaise Cemetery in Paris, coupled with  typical screeching of overhead crows, one cannot help but be sobered by the sight of such a departure from this life. 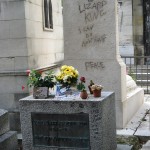 from his ardent fans, bent on re-enacting their hero’s lifestyle over the top of him.  Being grey in tone and blending with the darkening clouds, this added to the sense of foreboding already taunting us as we moved though this confused labyrinth. 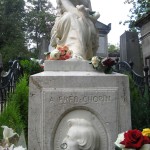 We happened upon Edith Piaf (1915-1963) and Fredrick Chopins (1810-1849) last resting places, only to be reminded that life is not for the feint hearted and death neither does nor take pity on the brilliant. With Chopin’s melancholic nocturne number 1 whirling in my mind, we ventured to Oscar Wilds (1854-1900) soaring and triumphant startling white, art deco headstone covered with thousands of lipstick kisses, evocatively witnessing a lover’s last parting. Not sure how this tradition started, no doubt an adoring fan, its sheer scale and over whelming presents did inspire me with a joyous thirst to rediscover Oscar’s wonderful works and impart a heartfelt kiss of my own.

The mood in Rome’s Cemetery for Strangers or to be more polite “Non Catholics” was a very different experience than in Paris… The day was glorious and the cemetery was an unexpected but welcomed sanctuary akin to walking through Monet’s garden or an English county lane flourishing with  brightly coloured blossoms and flowers rounded off  by the lively chatter of sparrows and warblers. A visit to pay our 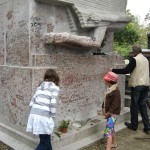 respects to the 18th century English poet John Keats, (1795-1821) who died in Rome at the tender age of 25 and Percy Basshe Shelly,(1792-1822) husband of Mary Shelly, author of famed Frankenstein, and their 3 year old son, were deserving of the monumental effort made to negate the disorder and heat of Rome.

History reveals these people hit the ground running and thanks to their early achievement managed to take a place amongst the literary giants  as they where not blessed with old age. With thoughts of my own demise, 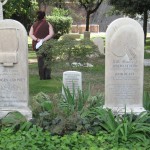 I spotted what was to become my ultimate tombstone, the Weeping Angel. Suggesting to my husband that I wanted this for my graveside because the sad story attached was the sculpture who honoured the love of his life with this magnificent work was to die of a broken heart, soon after finishing it. My husband’s look betrayed his non committal emotion and as he was walking away his parting suggestion was that my chances were not good and that he would be happy to scatter my ashes in the back yard and strategically place a pebble over the site then in true Jim Morrison fashion, open a bottle of wine, spare a drop and toasting to my honour, drink the rest to himself. Oh such ideas of grandeur dashed once again. I didn’t dare share with him, my plans should he expire before me. Be afraid  my sweet heart, be afraid.

Mexican Chocolate and Chilli Cake of the Dead