“Howling wind on arrival with impossibly looming and overhanging craggy cliffs offering a false sense of security with protection from the wind on one hand but the ever present thought of a sudden crumbling of cliffs, catapulting everything including us, into the Mediterranean ocean”. 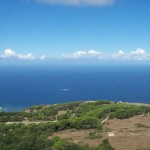 Such was my first impression of Sicily. Our destination, Castle mare di Golfo, 70 kilometres west of Sicily’s capital Palermo and 200 odd kilometres due east of the Tunisian tip of Africa.

Armed with 2 litres of local homemade wine and fresh cloudy delicious homemade olive oil, purchased from our newfound best friend Enzo who owned the well stocked little (negosia) corner shop, we embarked on what would become a contagious desire to return to the unforgiving cobblestone streets hosting impromptu festivals celebrating everything from the Madonna protecting the fishing fleet to a homage of Bertolli Beans and pasta. We found to our gastronomic pleasure that the rich and fertile volcanic soil germinated produce, permeated with the delicate aroma and flavour of cinnamon which has led us to add cinnamon to most of our culinary practice, evoking the pleasurable eating sensations we discovered.

The surprising but hauntingly beautiful sounds of Islamic call to prayer in some of the westernly situated towns, had perplexed us on more than one occasion, as to what we imagined we had 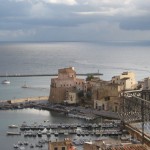 stumbled into. Coupled with clandestine walks through Palermo’s backstreet markets to gasp in wonder at what was locally considered to be edible. A stop in Corleone to walk the piazza where mafia urban legend tells of a mother licking her son’s blood off the pavement after he was gunned down. Our stay in Sicily was remarkable as it felt akin to the final frontier of cultural fusion with the many influences of its chaotic tumult past, challenging our already heightened senses.

Visiting  the extraordinarily ancient city of Syracuse, fortified the Brad Pitts legend of Sinbad the Sailor for the kids while my tantalising Herculean day dream was rudely interrupted by the annoying sounds of a demanding piano accordion playing gypsy chasing me down the street for money. 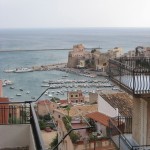 As this small island is home to over 5 million people in a space less than half the size of Tasmania, negating the roads became a dual of religious faith and iniquity by the offering of my prayers to deactivate my husband’s blasphemy. A little stress while travelling is an expected thing apparently.

So here I am back in Brisbane, busy planing our next venture to Sicily with more people in tow eager to experience for them selves, the vivid and colourful legends we ourselves have created from our wonderful memories of this most ancient of lands.

In honour of the humble Sicilian Zucchini, I offer a traditional recipe eaten by all locals, including ourselves, at the Zucchini Festival. It was passed on to me via Enzo’s 80 year old mother who still makes wine and the best olive oil. 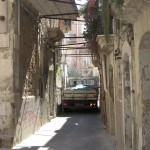 Fry onion in Sicilian olive oil, (where possible) add garlic then potatoes, cook for 10 mins, stirring occasionally so the don’t stick. Add zucchini and tomatoes with a little water, cook till everything done, approx 10 mins. Season and add to cooked pasta,

The Stone Boudoir, by Teresa Maggio